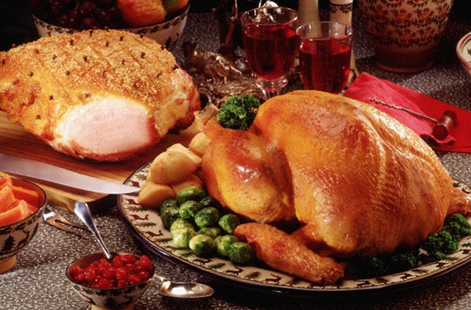 The Christmas dinner looks different in every country of the world and mostly even varies in every family. This isn’t different in Ireland and there are some typical Irish dishes for Christmas that you might come across during your time in Dublin, especially if you’re staying over Christmas time or in a host family. This is the main dish for an Irish Christmas dinner. It usually has a stuffing, for example a bread stuffing or one with potatoes and apples, and is served with roast or mash potatoes, vegetables like brussel sprouts, carrots or peas, gravy and sometimes with glazed ham. Roasted Goose is probably the more traditional way, because the Irish adapted the custom of Roasted Turkey at Christmas from the Englisch. Furthermore, you also have a starter like a soup or smoked salmon at your Christmas Dinner and a range of desserts. A Christmas Cake is a moist fruit cake with spices and candied fruit und most of the time it has an icing or frosting, sometimes even a marzipan icing. The cake is also soaked with brandy, but there are a lot of different recipes that vary from family to family. It is traditionally baked 6 to 8 weeks before Christmas and a glass of Whiskey often gets along with it. This is the typical Christmas day dessert. It´s made of dried fruit, eggs, spices and sued and is served with brandy or sherry sauce. The sauce can be set on fire too. The Christmas Pudding is also known as Plum Pudding and is being prepared months before Christmas and left to age to enhance the flavour. Spiced Beef is a meat that was marinated in spices, juniper berries and sugar for up to two weeks. Then it gets slow roasted, pressed and afterwards it´s served cold. It’s common in the south of Ireland to eat it around Christmas, especially in Cork. Mince Pies are out of puff or short pastry and they’re filled with a mixture of fruits, spices and nuts which is also called “mincemeat”. They are eaten as a dessert on Christmas day or with a cup of tea. Moreover, they´re known as the favourite food of Santa Claus so they’re left on Christmas Day for Santa to eat them.