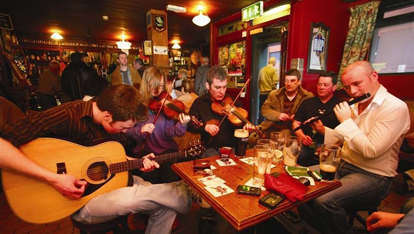 Are you for the first time in Ireland and want to know what the traditional music here is all about? Or do you just want to listen to some Folk sounds in a nice pub in Dublin? Either way, you have to read this post then. We will tell you something about the history of Irish Music and the styles you can find. Of course, we also have some recommendations for pubs in Dublin that are hosting awesome traditional Irish music sessions.

Come to Dublin and Listen For Yourself, Book Accommodation Here Traditional Irish music has its origins 2000 years ago when the Celts arrived in Ireland. It was also influenced by eastern music and it’s speculated that the Irish harp comes from Egypt.

The harp was the most dominant instrument from the 10th to the 17h Century and the landlords even hired harpists. In 1762 there was the first written collection and the most famous is from Edward Bunting out of the year 1792.

Due to the Great Famine in the 1840s, 2 million Irishmen and -women emigrated and established Irish music across the world, for example in the US.

During the 20th Century there were a lot of changes for the traditional Irish music. The speed was raised, musical arrangements were introduced, it found its way into the cities from the rural areas and the sound emerged with other styles from around the world. There were also fusions with other genres like Rock or Punk.

There are different styles of traditional Irish music that influence the way of how the instruments are played and how the rhythm is. There are styles for singing like Folk, Sean Nos and Caoineadh, but also some to dance to like Reels, Jigs, Hornpipes and Polkas. As you can see the music is very versatile and there are loads of different styles with different main themes.

We prepared a list of 6 of the most used instruments of traditional Irish music:

Pubs in Dublin where you can listen to traditional Irish music

Enjoy some good traditional Irish Music and experience the sound of Ireland!!